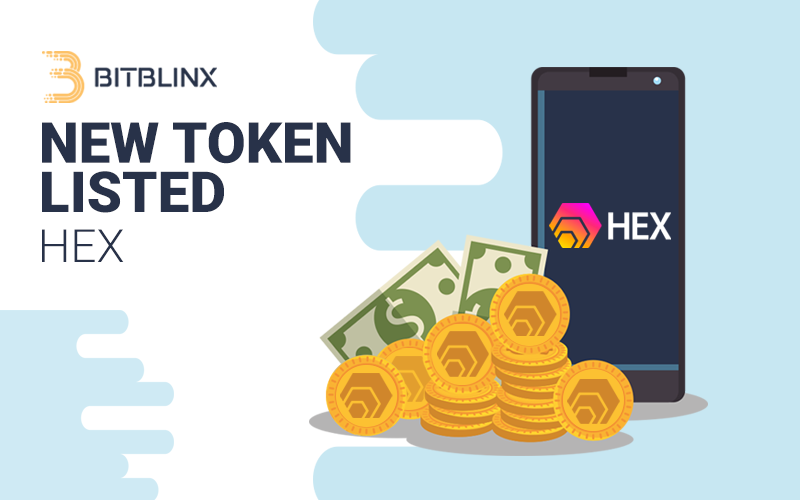 Do you want to earn interest when holding Bitcoin? HEX allows you to do so without depending on a third centralized party. Also, the fewer Stakers there are, the higher your ROI! And due to the fact this is such a great project, Hex is now listed on Bitblinx! You can now trade it against ETH and BTC.

HEX is a relatively new cryptocurrency that works as a smart contract built on the Ethereum Blockchain. This new financial tool has been promoted as a certificate of deposit that is blockchain-based, intended to fix a problem that no other cryptocurrency has fully solved.

Let’s dig deeper and find out more on what makes this coin worth acquiring.

What is a certificate of deposit in the traditional financial industry?

A (CD) Certificate of Deposit is a product presented to consumers by banks as well as Credit unions that offers a higher interest rate than that which comes with standard savings or checking accounts. The condition for this higher interest rate is that customers must agree to leave a lump-sum deposit and not withdraw their funds for some time; these funds are guaranteed by the government and consumers use Certificates of deposits as a safe way to earn extra interest.

The purpose of HEX

Bitcoin has only 3 main functions: Send, Receive, or Mine. If you want to earn interest on your holdings, you must entrust them to a centralized third party. These are security holes that are often hacked, destroy privacy, or introduce fees if you want to get your funds out. HEX adds a staking function which pays stakers instead of miners.

This replaces these third parties with a trustless Peer-to-Peer to system. Instead of sending your HEX to an exchange so they can lend it out on your behalf to earn interest for you, you just send it to the same Smart Contract that minted all the HEX in the first place, and it credits you interest. – Richard Heart

Hex allows its users to stake their tokens and receive interest; moreover, the longer they stake their HEX the higher their rewards, which are paid out in HEX tokens.

The interest payments are said to range from 3.69% to 369% which ultimately depends on the percentage of the HEX token supply staked, and the amount of Stakers.

With HEX-Token one great advantage for partakers is that it offers huge referral bonuses with every new participant referred, and as they bring in more participants they are entitled to more bonuses.

The Benefits of HEX

The way HEX is designed is truly incredible, so much so that failure is not an option. Its features are carefully customised to Fastrack its adoption as well as increase its price. How? Users who acquire HEX the soonest, stake more for a longer period and refer more people to follow suit, are rewarded the most. Another way in which Hex boosts its adoption is by giving free HEX to Bitcoin holders (learn how Bitcoin moves)

Instead of being vulnerable to inflation, HEX-Token participants earn it by locking their coins and competing against each other to see who can stake the largest for longer. The only users that suffer from inflation are the ones that don’t lock their coins because nobody knows when they will sell them.

HEX has a pretty amazing project. The more you get to know about its amazing features the more it grows on you and you realise there isn’t much room for failure.

Don’t miss out on this exciting experience that HEX has to offer, Acquire them NOW! On https://trade.bitblinx.com/sessions/market-view the sooner you do it the better for you.

You may also check out these helpful HEX sites;